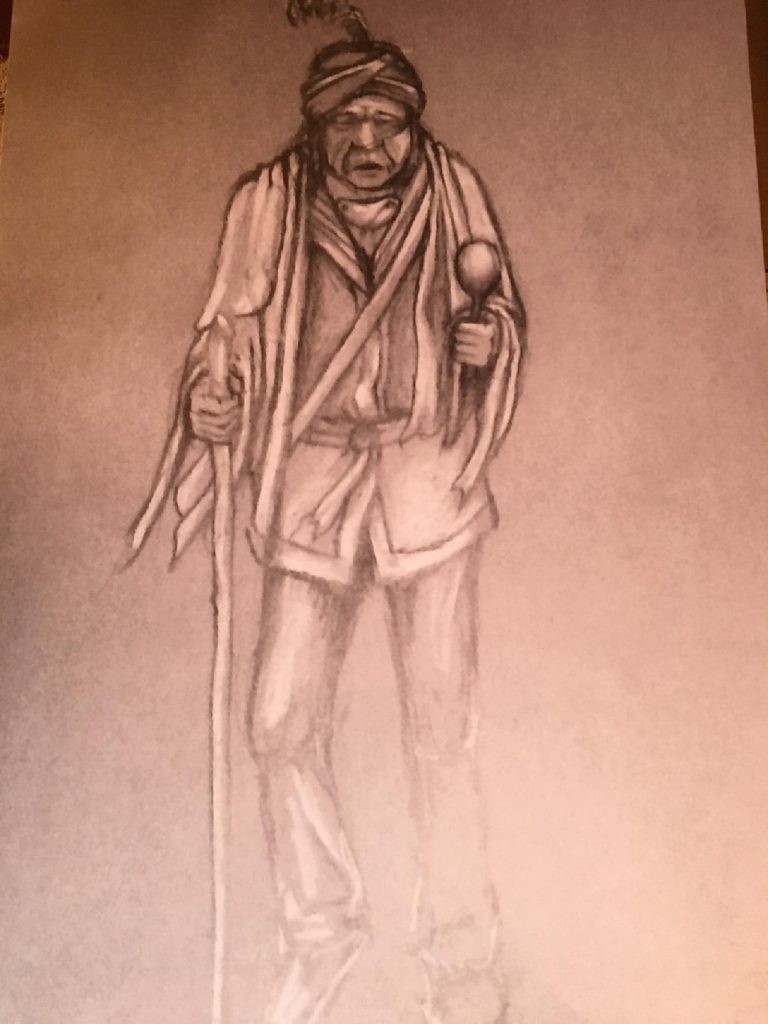 During the summer of 2018, Tuscumbia is expected to join two other Shoals cities with a dramatic and majestic 18- foot tall sculpture honoring our city’s music heritage. We believe that the very first musicians in the Shoals were our Native Americans, who used drums, rattles and ankle bracelets as well as their voices to tell their often very moving stories. Lucas Stokes, a Shoals-based sculptor with numerous local commissions, has proposed a semi-abstract aluminum sculpture portraying a Native American who is leading his people through Tuscumbia and along the route of the Trail of tears. The site of the sculpture is next to the Train Depot an Museum and on the actual trail, which passed through the city on its way westward to Oklahoma and neighboring territories. The image Mr. Stokes is portraying is that of an Encourager, an Indian who is encouraging his people to move forward along that path of misery and pain. They had no choice. During the Removal period, commonly known as the Trail of Tears, their musicians, known as Encourager, marched along with the people singing and keeping rhythm to bolster their spirits. This sculpture represents an Encourager and salutes the beginnings of the area’s music culture and

A few years ago when the Shoals began to acknowledge its illustrious music history it became apparent that a casual visitor to our area would find no visual recognition of that history. Out of that recognition grew the Singing River Sculptures project.

The project has two phases, first a series of city-based sculptures of 18 to 20 feet in height and erected in or near the centers of each of the Shoals’ four largest cities. In 2012 Sheffield dedicated its Rock-a-Billy styled image in downtown and in 2014, Muscle Shoals unveiled its bass player seated on a session stool. Tuscumbia will be the third city and recently Florence commissioned its sculpture with a location on the southern edge of downtown.

The second phase is even more imposing: a grouping of music themed sculptures up to 25 to 30 feet tall overlooking the Tennessee River in the Florence Veterans’ Park and called the Singing River Sculpture Garden.

All of the sculptures will be owned by their cities, which will surround them with attractive landscaping and maintain them.

The sculpture project has a Facebook page: Singing River Sculptures

The Tuscumbia sculpture is honoring its exceptional Native American history

While we are more familiar with the story of the Trail of Tears and the era just before and after that period, our Indian heritage goes back through the eons.

The Tuscumbia area is blessed with truly ancient heritage and an incredible diversity of nature rarely found on earth. People first came to this are over 11,000 years ago at the end of the last Ice Age. Because of the bounty of the valley and river, they have never left. We have inherited the legacy of their lifeways and traditions. There were four major cultural periods before the arrival of modern peoples such as the Chickasaw, Cherokee, Creek and Euchi. The Paleolithic began about 10,000 B.C. and lasted until about 8,000 B.C.

These first inhabitants found a land much cooler than today and inhabited by giant animals such as the mastodon and the sabretooth tiger. The Paleolithic peoples excelled at flint knapping and made superlative fluted Clovis projectile points. As time passed, the climate continued to change. Between 8,000B.C. and 1,000B.C. the peoples of the archaic period adapted to these changes and created new ways of living in a land that began to resemble the modern landscape more and more.

They used the incredible resources of the fisheries in the Tennessee River, hunted a wide variety of game in the forests and prairies and took advantage of the abundant nut and seed crops in the uplands such as acorns, chestnuts, hickory nuts and walnuts. They left behind evidence of many kinds of sophisticated tools and implements for working in bone, wood, fiber, stone and shell. Between 1,000 B.C. and 800 A.D. the peoples of the Woodland period began to live in larger settlements, practice horticulture, create fired vessels, adopt the bow and arrow and add more ceremonies and rituals to their lives, some of which live on today. Between 800 A.D. and 1300 A.D. the peoples of Mississippian period adopted agriculture, established alliances of villages and superbly decorated artwork evidencing a highly developed cosmology.

Europeans and their arrival in Tuscumbia area

Native American in Tuscumbia trace their roots to the end of the Mississippian period and later. With the arrival of Europeans in the area, a tremendous cultural exchange of ideas and lifeways took place. This is why on many sites in the valley you can find evidence of everything from mastodons to musket balls to the roots of the blurs. In the late 1700s a native American village known as Okacopasaw or Cold Water was located just west of the big spring near what is now downtown Tuscumbia. Periodic skirmishes fueled antagonism between the new white settlers and the Native Americans. In about 1785 Colonel James Robertson of Nashville burned Cold Water, which at the time was associated with the Chickamauga Confederacy.

The sculpture draws on the Trail of Tears story

Several decades later, the U.S. Government led by the former Indian fighter, President Andrew Jackson, forced a number of tribes to give up their homelands in several southeastern states and move to what is now Oklahoma. This forced migration of the 1830s was known as the “Trail of Tears.” Of the man Trail routes, some passed through Tuscumbia. By that time a two-mile long horse drawn railroad ran from the center of Tuscumbia to the Tennessee River at the mouth of Spring Creek at a site known as Tuscumbia Landing. Thousands of Native Americans passed through the city and onto the Tennessee River to be transported westward. The Tuscumbia newspaper, The North Alabamian, sympathized with the plight of the Native Americans, reflecting the sentiment of many local citizens whose acts of kindness and support are now a part of the Native American lore.

©2023 City of Tuscumbia. All Rights Reserved.

Developed by Students of the UNA CSIS Department